I have written about my Bloc-Tronic electronics kit before. My original article on the kit has garnered several comments asking if I could scan and upload the manual.

I’ve finally uploaded the first 100 pages to my images site! The entire manual is around 180 pages, so this is most of it and I hope to get the rest up sometime soon.

If you are lucky enough to have a Bloc-Tronic kit without manual, hopefully this manual will be of use. Also, since the experiments include schematics in addition to the block layout they could be done on a standard breadboard or even permanently assembled from components.

The experiments start off simple and get progressively more complicated. There’s everything from a volt meter to a radio receiver.

Yes, proving that just because you can doesn’t mean you should someone went out of their way to come up with this little novelty:


Yes, for $20 for the single or $55 for a set of three you too can put USB power to use in a way you never imagined with your very own USB powered humping dog.

I’m getting ready to travel for business next week. Since I haven’t flown in about a year I figured I’d check the TSA website to see what I can and can’t carry on.

Well, the list is more detailed than I would have expected. It seems if I want to carry-on toothpaste it still needs to be in a 3 oz or less container, but at least I can carry on my Optimus Prime!

Thank goodness. I hate to think of the little guy shivering in the cargo hold. 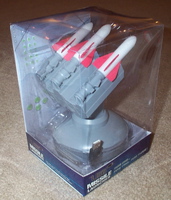