While researching the effect of RAID 5 disk configuration on Oracle databases I came accrost more than I thought I expected on the topic.

With disk as cheap as it is today there is no reason to ever use RAID 5 on an Oracle database. Even for a database which sees only a moderate amount of updates the performance loss incurred by using RAID 5 is too high. RAID 1 or some combination of RAID 1 and RAID 0 should be used when high availability is required. Database 10g users should also consider allowing Oracle’s new Automatic Storage Management to handle redundancy on un-mirrored disks (or even raw partitions.)

But don’t take my word for it. Here are some opinions from some notable Oracle administrators:

No RAID5. Use RAW whenever possible and consider RAID10 or 0+1. RAID 5 can severely affect performance on highly updated databases.

RAID-5 is, in fact, very powerful and inexpensive. It is also a technology to be avoided in most cases when configuring your Oracle database! This may seem a harsh statement, but the reality is that although RAID-5 provides good levels of data protection at a low monetary cost, this comes at a very high cost for disk I/O. In particular, write operations on RAID-5 arrays can be orders of magnitude slower than the same operations on a single disk.

Use RAID10 when possible, RAID5 if it is not. Size the array based on IO needs first, then storage capacity and you canâ€™t go wrong.

Oracle recommends using (SAME) Stripe And Mirror Everywhere (a.k.a., RAID 1+0) for all systems that experience significant updates. This is because of the update penalty with RAID 5 architectures.
…
Using RAID 5 for a high-update Oracle system can be disastrous to performance, yet many disk vendors continue to push RAID 5 as a viable solution for highly updated systems.
…

RAID 5 is not recommended for high-update Oracle systems. The performance penalty from the parity checking will clobber Oracle performance.

If you’re still not convinced check out Baarf.com. This site is committed to the Battle Against Any Raid Five (or four or free, uh, three.) The site has links to several more articles exposing the perils of RAID 5.

Tim Haroutunian recently discovered the open-source, cross-platform utility Synergy which allows you to seamlessly share a keyboard and mouse with several computers of varying platforms.

The behavior of Synergy is similar to having multiple monitors on a single computer with the added advantage that you’re controlling multiple systems. Since I have both a Mac OSX desktop and a Windows laptop on my desk it was nice to reduce myself to one keyboard and mouse! Even clipboard data is shared between the systems.

Setup was a little less than intuitive but well worth it. Out of the box, security is fairly weak, however the Synergy project page does have instructions on how to tunnel Synergy traffic through SSH. Mac, Windows and Linux binaries are available along with the source code for those DIYers.

Zach tells me I need to post how to find files and execute a command on those files. While the man pages are always the definitive reference, these are the options I use frequently. As usual, anything in italics should be replaced with the details for your search.

Note: WordPress loves to convert quotes into fancy quotes (pointing in from each side) so these commands may not work too well if copied and pasted. On the bright side, there’s no time like the present to start commiting these to muscle memory.

Find a file and execute a specific command:

The open/close curly bracket marks where the name of each file found will be substituted and the backslash-semicolon marks the end of the command to execute.

Here are a few other options I use frequently:

Search for a file by name:

Search by name with wildcards:

Search for files modified within the past n days:

Search for files modified before the past n days:

These are mostly based on my experience in Solaris using the bash shell. They should work just about everywhere, but check the man pages as mileage will vary.

For more tips like this check out my book Easy Linux Commands, only $19.95 from Rampant TechPress. 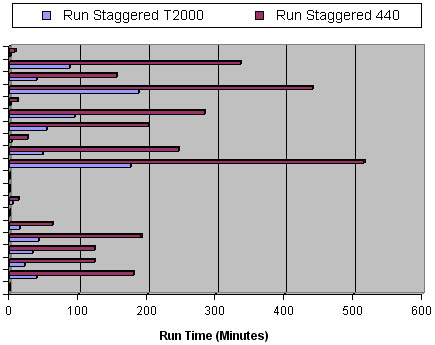 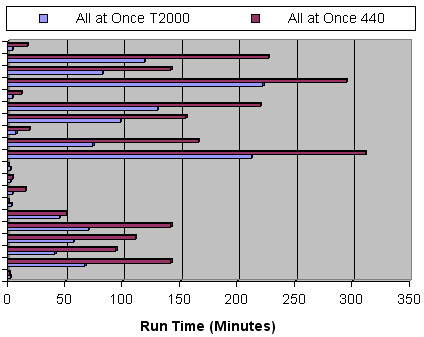 After receiving my try-and-buy Sun Fire T2000 over a week ago it’s finally up and running. While we have yet to hit it with much of a load, here are some thoughts on the out-of-box experience:

Before even powering up there are a couple interesting observations about the system. The first is the lack of power button, switch, or key. In fact there is only one button on the system and that is an indicator button which just flashes an LED on both the front and back of the system to make it easier to locate (a nice feature, by the way.) You’ll quickly find the hot-swappable dual power supply and fan compartment. The adventurous will find and the big button on top of the system which allows you to gain access to RAM and other non-hot-swappable components.

All of these compartments and components are accessible without the need for tools. The hard drives are on hot-swappable sleds which pop out the front of the box. The hard drives are small (2.5″ I believe) allowing room for 4 bays in the front and still affording enough space for ventilation. I was somewhat surprised to find laptop-style drives in a Sun server, but I guess I can’t come up with any reason not to.

After giving the hardware a good once-over it was time to get the T2000 up and running. I have to say Sun came up a little short on the out-of-box experience at this point. I’m comfortable with, even partial to the absence of on-board video on a server, and Sun has chosen to include serial via RJ-45 on the T2000. Sun was on the right track including two cables appropriately shielded for use with this port, but neglected to include an adapter to go to the 9 pin serial we all have on the back of our PCs.

After rummaging around for the proper adapter to hook the T2000 to an old laptop we plugged it in. The system is surprisingly (read obnoxiously) loud, but hey, it’s a server not a desktop. After a few minutes of the regular hardware diagnostics stuff the system came up to an sc> prompt.

This is where those who are not familiar with Sun’s newer hardware will come to a complete stop. The only documentation included with the system is the Sun Fire T2000 Server Getting Started Guide and that does little more than tell you what the different lights mean and where you can find more documentation online. If you get online and grab the Sun Fire T2000 Server Installation Guide this will walk you through dealing with the SC serial management port. In my opinion Sun should have included this one in hard copy with the system as well.

After a couple more steps things start to feel familiar and the rest of the setup is much like the Solaris 7, 8, and 9 installs I’m used to. With just a few extra steps here you can (and I’d recommend) configure the SC Network Management port which will allow you the same functionality as the SC Serial Management port without the need for the serial cable and adapter. You will need an extra network drop and IP address to use network management, but then you’ll be able to telnet to it for administrative functions. Of course in a production environment you’d want this behind a firewall or on a private subnet.

Other than that the system seems quick. Our next step is to get Oracle on the system and throw some queries at it. I’ll share more as soon as we get some results.