So I finally took the plunge and bought a new 20″ Apple iMac. I’ve got to say I love the machine in all its glass and aluminum glory, but I can’t let this transition pass without paying a little homage to my 400MHz Mac G4 tower that has served me so well for so long. 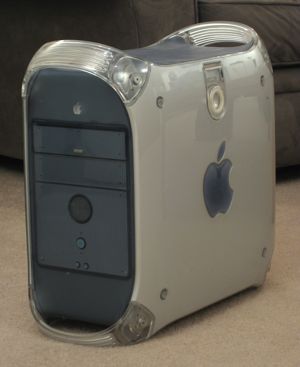 I bought this machine in January of 2000 (my senior year of college.) It has run essentially nonstop since then at any time carrying out some or all of the following duties at any given time:

The system came with a 10GB hard drive which I immediately upgraded to 36GB. The initial 128MB of RAM was removed to make way for a couple 512MB chips giving the system a full gigabyte of RAM. Though this mac originally came with Mac OS 9 I was able to upgrade it to OS X, even 10.4 without any problems. Now I don’t mean it ran part of 10.4 or it was in any way crippled. This 7+ year old machine runs the latest OS just fine.

The decision to replace the machine came for two reasons. One, I wanted a machine I could hook up to my TV. Two, when working with large files (high resolution movies and pics from my 7 MP camera) things really slowed down. It was also time for a bit more hard drive space.

So with over 7 years of runtime with, by the way, no maintenance required I can happily retire this old G4 and honestly say it owes me nothing. I only hope the new iMac does just as well.