Want to tell someone exactly how you feel? Send them a lame-o-gram from YouAreLame.com! 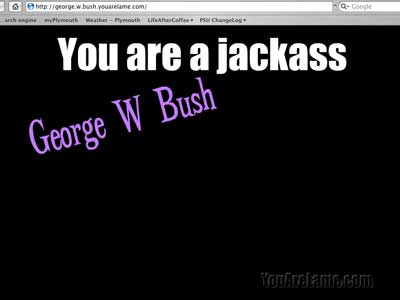 With clever use of wildcard DNS and probably a nice Apache rewrite rule YouAreLame.com lets you add any subdomain to their URL and will render a simple, yet clear message customized for the appropriate party.

Go ahead, try it. All you have to do is go to http://firstname.lastname.youarelame.com/. They provide the insults and the music.

Thanks to Don Burleson for sending this on to me.

Update: As noted in a comment below, this site doesn’t seem to be working right now. It’s a shame really…

Here’s a few funny commercials to lighten up your Friday afternoon.

Don’t we all just long for the good old (free) days of AdCritic.com.

Thanks to Donald Burleson for sending the second one on to me.

Carla points out this great video of pug bowling. It starts off a bit slow; in fact you can skip the first 40 seconds.

Perhaps the funniest part is the end which explains that Samson (the pug in question) learned that if he knocks over all the pins he gets a treat. He now knocks them over as soon as they’re set up. 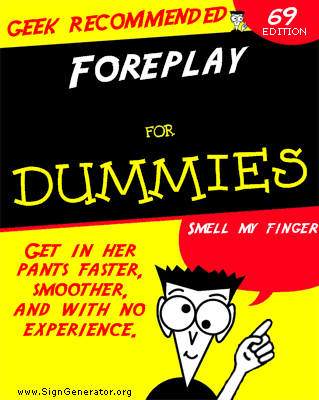 Make Your Own “For Dummies” Book Cover

Make Your Own South Park Character

So here are your challenges for the day:

First, make a “For Dummies” book that isn’t safe to hang in your cube.

Second, render your boss as a South Park character.

If that’s not enough “Make Your Own” for you, check out the Make Your Own Warning Label site.

In case you missed it, the winner of ABC’s American Inventor was anounced tonight on the one hour finale.

Congradulations to Janusz Liberkowski for winning with his invention the Spherical Safety Seat.

Click here for some details on the Spherical Safety Seat. This invention is one of the most original in it’s area since the safety seat itself.

While I do hope there is a second season I also hope the producers will consider changing the format of the show.