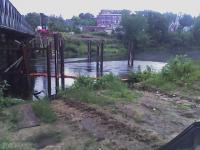 A dreary day on a dreary week, but I stopped on the Holderness side of the bridge to get a look at what’s left of the old bridge. This is it. Just a few i-beams sticking out of the water.

I’m sure we’ll start seeing signs of the new bridge soon, but I’m not sure how much they will be working on it into the winter. For now I just hope they keep the traffic flowing while school is in session.

I’ll keep an eye on the progress (since I drive by this daily) and update as they start the new bridge.

Two days later and it’s almost gone. The bridge over the Pemi River is no longer connected to either shore.

At the rate they are going, there will be nothing except pilings left by the end of the week. Hopefully they are as quick at building the new bridge as they have been about tearing down the old one. Then again, the temporary bridge is already better than the old one. I guess weâ€™ve already won.

Thanks Leasa for taking pictures so I could continue driving without getting in a fiery car wreck or driving off the temporary bridge.

As some I’m sure are aware, the bridge that links Holderness to Plymouth (NH) is being replaced. It’s been fairly cool watching the old bridge being taken down over the past month or so and I just wanted to share this with some of the folks who may not get up to Plymouth so much anymore.

The picture was taken earlier today from the temporary bridge. It was taken with a cell phone so the quality isn’t stellar, but you get the idea.

More pictures of the earlier part of the project are available at the University’s Phisical Plant site.