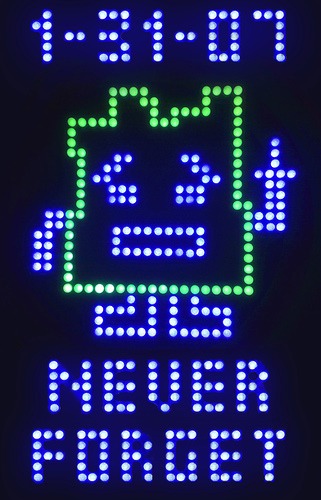 As this was all going down yesterday I thought it a bit of an overreaction that the Massachusetts bomb squad was being dragged out for what was obviously an LED array (even from what little video the news stations had.) Now Sean Stevens and Peter Berdovsky who placed the devices around the city are being charged with placing “hoax devices” and disorderly conduct.

Now lets, just for a moment, review the definition of the word “hoax“. Now, if you read it carefully you’ll notice it starts off “to trick…” The phrase “to trick”, at least to me, implies intent. If you’re paying any attention to the reasons these guys (and folks like them in other US cities) put the devices up and what their purpose was you know already that there was no “trick”.

But anyway, while the press is busy sensationalizing the whole incident, the two men are taking time to learn a bit about hair styles of the ’70s! Really! Click through and watch the video. Bravo to these guys for not feeding the media machine!

Get these guys for graffiti, maybe even trespassing; even disorderly conduct, but they’re not terrorists. Now, Turner Broadcasting and the ad agency they hired that came up with the idea have a bit more to answer for, although the campaign was received quite differently in other cities. If they had any brains at all they’d have walked into Boston today with an apology and a million dollar check.

The MAKE blog (where I stole the image from, hope they don’t mind) continues to have some interesting information on the event.

I am happy to say that MasterWish.com is getting some fantastic feedback from the user community!

While we are not about to stop improving the site it is fantastic to see feedback like this weblog entry from Kevin Scaldeferri’s Weblog. Glad you liked the site Kevin! In our hectic, fast paced, information-heavy world I’m glad to hear people appreciate our less-is-more attitude.

MasterWish was founded on the ideal of offering flexibility… a tool that a person uses the way they want to, not the way we think they should. This feedback helps guide us to continue to develop in this direction.

For more information on MasterWish, check out my previous article, or go straight to masterwish.com and check it out for yourself!