Now that USB flash drives are cheap and common producers clearly need to get creative to compete. Here are a couple great ideas for storage with a more personal touch:

Stuff this cuddly USB bear with 1GB of photos, music or documents. 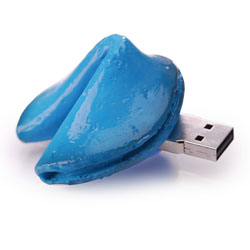 I have to admit this is the first blue fortune cookie I’ve ever seen, but imagine how many fortunes you could fit in this USB fortune cookie 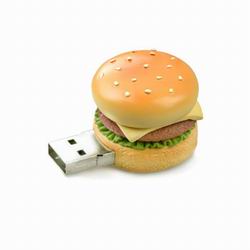 Also from the freshly baked line the USB Hamburger may not be a half-pound burger, but it is a 2GB drive!

Of course none of these beat the USB Humping Dog but you can’t store files on that (and let’s face it, it might not quite be appropriate for that executive board meeting.)

Thanks to Don for the USB bear.

There’s a lot of buzz around smartphones right now. With falling prices and service improvements it’s becoming clear that cellular providers will beat municipal Wi-Fi in all but a few areas.

That’s the idea I explored in my recent article for Internet Evolution.

At the same time, smart phones like the iPhone have crossed over from being business tools to consumer products. Indeed, they are quickly becoming the mobile device of choice.

And why not? More than just phones with PDA functionality, these devices have now become full-fledged platforms. Web browsing, chat, email, and games are their core competencies, and applications for them are just getting more interesting from there.

Read my full article for more of my thoughts on how these new devices and services will shape our lives in the near future.

When tempered glass breaks it blows into a million tiny pieces. While startling this actually makes the glass safer when it breaks as there are no large, heavy pieces which are actually more likely to harm.

I never understood why otherwise strong tempered glass would break so spectacularly but this article and the videos below of “Prince Rupert’s Drops” (small drops of tempered glass) show how the inherent tension caused by quick cooling makes glass stronger, but explosive.

Modern electronic locks are getting more complicated but it’s amazing how vulnerable they can be. The video below shows how a high end electronic lock can be bypassed with a combination of induction and magnetic force.

If you’re not familiar with this type of locks it may not be clear, but the lock is actually being unlocked by spinning a disc with embedded magnets near the motor that actuates the lock. Barry at blackbag offers a far more detailed explanation of the device.

This is a good reminder that if a lock can be opened then it can be picked. The manufacturer will undoubtedly correct this vulnerability but there will always be another way to get in.

With gas prices skyrocketing and the temperature not far behind (at least here in New England) there is always talk about how to save money on gas. One topic which seems to have solidly hit the mainstream lately is the notion that you can save money by buying your gas when it’s cold. This has herds of people buying their gas on cold days or in the wee hours, but is it worth it? Well, consider the following:

Gasoline, like most things, does expand when it’s warm. According to this study performed by a House committee last year the ratio is around 0.069% per degree Fahrenheit. That means if you are paying $3.75 per gallon you may be paying a full 7.7625 cents more per gallon for gas at 90 degree than you would at 60 degrees. That adds up to about 93 cents on a 12 gallon fill up if the gas is a full 30 degrees warmer.

So for my money, instead of getting up early and wasting gas with a special trip to the station, consider combining some errands, carpooling, or slowing down a couple MPH on the highway. These changes will not only save you money, but also save gas and reduce emissions.