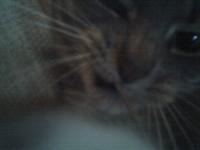 This is a picture of my cat Gwen (a.k.a. Critter) taken with my cell phone camera.

Perhaps I should put the antenna down before I take pictures with my cell phone.

I swear, that cat will chew on anything.

So it appears I am not the only one who thinks these drinking birds are cool. Artist Daniel Reynolds has taken them over the top.

Reynolds conceived the idea in 1994. After extensive re-engineering of the original drinking bird, in 1998 Reynolds unveiled 15 new drinking birds at six and a half feet tall!

Check out more photos, movies and information on this fantastic exhibit at drinkingbirds.com.

This enormous display piece was only ever shown in Germany; however it was received very well there. Hopefully someday soon someone in North America will pick up this exhibit. For now we will have to settle for the website.

A variety of Seven Card Stud, Baseball is lots of fun and tends to build good-sized pots. With more than six players it should be played with a double deck.

Betting is the typical poker method, however should start with the highest hand that can be made from face up cards. Players can fold at any time.

Each player antes. The dealer deals two cards face down to each player. Players may look at their face down cards.

Once the initial face up cards are dealt, each player should look at their face down cards. If they have any face down fours they can purchase an additional face down card now. There is now a betting round.

The game continues with three more face up cards and one more face down card to each player (plus any additional cards players choose to purchase.) There is a betting round between each dealing round.

There is a final betting round then each player must make their best 5 card poker hand out of their 7 (or more) cards. All players reveal their hands and the highest poker hand wins.

Hints: Hands can be very high due to the large number of wilds. Donâ€™t be overconfident.

Variations: Some dealers will choose to deal complete rounds then offer players the option to purchase additional cards if they received a four.

One of my favorite pastimes is playing poker with friends. Quite often someone will teach us a new game, weâ€™ll have a great time playing it, then weâ€™ll forget all the rules before we play again. In posting these rules I hope to keep track of some of these games.

Also known as Cuckoo, Screw Your Neighbor is not really poker, but this is a great game, especially with a big group. The game is played in rounds and the deal rotates. The objective is to not have the lowest card at the end of each round. You donâ€™t need to have the highest card, you just donâ€™t want the lowest.

3 to 10 (or more) players. More players will make for longer games.

Each player places two equal stakes directly in front of them. The stake can be a quarter, dollar, chip, or whatever folks are comfortable with.

The dealer deals one card face down to each player (starting with the person to their left, as usual.)

Each player looks at their card. Starting with the player to the left of the dealer, each player in turn can either keep their card or trade with the person immediately to their left in hopes of getting a higher card. Aces are always low in this game.

If a player is asked to trade they must, unless they hold a king, at which point they can show the king and block the trade. If a trade is blocked, the player who wanted the trade must keep the card they are holding.

The dealer has the final option trade but must trade against the deck if they decide to.

After the dealer trades the round is done. Everyone must show their card and the player, or players with the lowest ranking cards (aces are always low and suits donâ€™t matter) must place one of their stakes into the pot.

After a player looses twice and has no stakes in front of them they are said to be â€œon their face.â€ A player who is on their face can continue to play (and even win) until they loose one more time.

The next round begins with the next player to the left, dealing as above. Play continues until only one player is left in the game. They win, and collect the pot.

Hints: Donâ€™t forget you can block a trade if youâ€™re holding a king.
If you are holding a low card (say a 2) and someone trades with you for a higher card (say a 3) you can rest easy and keep the higher card since you know you donâ€™t have the lowest card on the table.

Variations: If playing with a large number of people (7 or more) we usually do not allow a player to continue after loosing both stakes. This keeps the games a little bit shorter.