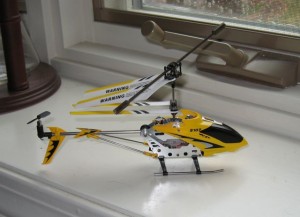 I’m a long-time fan of radio controlled flight, so when XenonProject.com offered me the chance to review the S107G Mini RC Helicopter I was excited for the opportunity!

Out of the box

The heli is very small, with a main rotor (blade) diameter of between 7 and 8 inches and a body length around the same. It can charge from the remote (which requires AA batteries) or off USB (very convenient in the office.) Charging took a little shy of an hour. The heli seems to hold a charge well and even a week after putting a full charge on I was able to fly without recharging first.

This type of heli is too small for outdoor flight, but perfect for the living room or office. The controller works over infrared, like a TV remote, but unlike a TV remote it doesn’t require you to point the remote at the heli. Pleasantly, I had no trouble with reception.

Overall construction seems surprisingly solid for such an inexpensive unit. There are several metal parts in the frame, plastic parts seem well engineered and reenforced in the right places, and nearly everything is held together with screws which will make repair possible. When on, the S107G has a blinking LED on the nose. While it does seem largely decorative it gives the heli a nice visual anchor making it easy to see where you are pointed.

The controls are simple (which is good because the manual is weak at best.) The throttle (left stick on the controller) will control your height, which is a little more complicated than you might expect if you’re new to RC flight, but is easily mastered if you find some time to fly daily. Other than that the heli flies much like an RC car drives. On the right stick forward and back do what you’d expect, left and right turn the direction of the heli.

Having flown RC for years I started out easy, trying to hover a foot or two off the ground without moving forward or backward. This proved highly achievable due to the S107G’s gyroscopes which hold it solidly in position. Without any work the heli stays right in place, other than the height which you will have to get used to controlling.

If you get the hang of keeping a consistent height the hard part is done. In forward flight, the S107G flies stable and straight. The heli also stops forward flight quickly when you let off the stick, unlike it’s larger and more ‘scale’ RC cousins. Left and right turns are possible while hovering or moving forward. Any air movement in the room will immediately become evident as the heli takes on a life of it’s own near a drafty window, ceiling fan or heating vent. Be aware of these and try to avoid them when you’re getting started.

All-in-all the S107G is about as easy to fly as an RC helicopter could be. The flashing light and bright colored body aid visibility and the gyroscopes simplify flight.

You will crash the S107G. It happens. I have crashed mine at least 50 times in the mere two weeks I’ve had it. Thankfully the heli seems very resilient! I have run it into walls, landed too fast, hit chairs, and even hit the main blades on the ceiling causing the heli to drop nearly 8 feet onto the hardwood floor. Each time I cringed and thought I’d be replacing parts I just turned it back upright and away it flew!

When it does eventually need parts, XenonProject.com offers replacement parts right off the product page. Parts seem very reasonably priced and most should be easy to replace.

Start with tail-in hovering – Put the heli on the ground in front of you with the tail facing you. In that orientation left is left, and right is right.

Ground effect – Any aircraft behaves differently near the ground than it will further up in the air. You will find that the S107G is a lot more stable when you get it at least 1 foot off the ground, so make that an early goal.

If you’re considering a larger RC heli get one like this to learn a little first. Each model will fly differently, but one of the biggest challenges for folks new to RC is getting used to the orientation. When the heli (or a plane, or car) is facing you the controls for left and right will appear reversed. Getting used to that on an inexpensive unit will save you money and downtime when you start flying more expensive helis.

If you’re the type who can’t stand not having your toys, I’d suggest buying an extra set of main blades. They are the only part on mine that is showing some wear, but even after dozens of flights I’m still going on my original set.