Now here’s a cool idea… A kite that looks so much like a computer cursor you’ll think worlds have just collided! 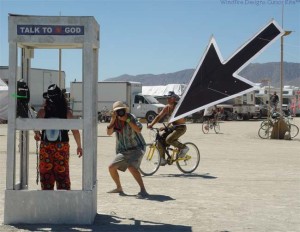 No, this isn’t a Photoshop trick, it’s a kite (clearly pointing out the “Talk To God” phone booth, must be for traveling Catholics). Designed by Tim Elverston for WindFire Designs it doesn’t sound like they’re going to be selling these but rather are more interested in performing with them.

Carefully designed by Tim Elverston, this high-end addition to the WindFire collection marks the beginning of the WindFire OS Series. Stay tuned and don’t worry, we’ve got all the logical extensions of this series in the works!

Hmm, OS series is interesting… How about a kite that looks like the Windows flag? Nah, it would probably just crash.

I’m just waiting for a Clarus the Dogcow kite. Moof!